How to Remain Celibate While Dating

Recently, I was asked if my husband I were celibate before marriage and if so, how?

My response: “yes and one word – boundaries!”

Before I met my husband I made up in my mind I wasn’t going to make the same mistake for a third time and I was determined to remain faithful to God and honor Him with not only my life but my body.

“Do you not know that your bodies are temples of the Holy Spirit, who is in you, whom you have received from God? You are not your own; you were bought at a price. Therefore honor God with your bodies.” – 1 Corinthians 6:19-20

I learned from previous mistakes that it’s better to avoid temptation than be in a situation where you have to flee it. When my husband and I started dating we made sure to only see each other in public and we never visited each other’s homes. It was best to just avoid close quarters. Watching a movie late at night while my roommate was out of town was no longer an option.

Along with our boundaries there were several things that helped us remain celibate before marriage:

1. Understanding: we were both on the same page.  We both had the same end goal of marriage, thus, we were intentional about dating God’s way.

Dating someone who is not fully in agreement would had been hard. I’ve been in that situation before and failed.  You’re more likely to be tempted by your partner  and he/she may not be as committed to the relationship.

2.  Accountability: we both had someone close to us, who we allowed to check in on us. My husband and I came up with a grading scale and after every date we would rate ourselves. We got a C once but never failed. Sounds funny now but it worked, and we would share our grades with our accountability partners.

3.  Protecting Your Eye & Ear Gates: when dating it may be best to skip over the love scenes in movies and avoid some of  your favorite R&B songs. It’s probably best to stick to comedy and gospel. Ha!

Abstinence while dating is absolutely possible but it takes intentionality. However, it’s always worth the wait! 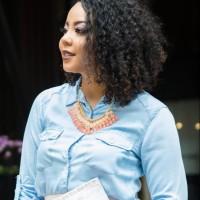 Aleida Lane is an author, speaker, wife, mother and “First Lady” of Peter Rock Church in Chicago, IL. After experiencing personal freedom from fear, low self-esteem and other false identities, she became passionate about helping people discover their true self and walk in their purpose. In November 2014, Aleida released her first eBook, “5 Keys to Discover the Best You: Freeing the Heart and Finding Purpose.” Hundreds of copies were distributed online. In August 2015, Aleida launched and authored Aleidalane.com to further her message of wholeness and purpose through blogging and videos. Serving on the Love Sister to Sister Committee for New Life Covenant Church Southeast’s women ministry for nearly two years, she gained hands-on experience in loving, embracing and supporting women’s spiritual and natural need. She also served the women of Wives and Waiting, Chicago Chapter, an international movement. Aleida hold a Master’s from Columbia College Chicago and Bachelor’s from University at Buffalo. She currently lives with her husband and daughter in Chicago, IL.

Why I Would Never Get Married Without Pre-Marital Counseling

How to Remain Celibate While Dating